According to Sabah, Lyon have made an offer for Fulham midfielder Jean Michael Seri, who’s currently on loan at Galatasaray.

The Ivorian midfielder hasn’t had the best of spells with Galatasaray this season and there were recent reports in the Turkish press that he could leave the Super Lig club in this transfer window.

Sabah report Lyon have reached an agreement with Fulham over a permanent transfer for Seri, however, Galatasaray would need to agree to this. There no is indication what the Ligue 1 side have offered for the central midfielder. 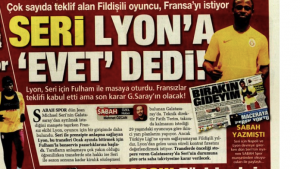 The Turkish club’s manager Fatih Terim reportedly wants to give the 28 year old another chance as he believes he could become an important player once they complete all their transfers in this window.

Seri joined Fulham during the 2108 summer window, but signed for Gala on loan a few months ago after the west London side were relegated to the Championship.

He has made 15 appearances for Istanbul club in all competitions this season.