As we all know, Inter are interested in Christian Eriksen, and Tottenham are making life relatively difficult for the Italian side with their demands.

A deal in January would cost upwards of €20m, which the Serie A outfit don’t want to pay for a player whose contract expires in June, and yet they aren’t ready to give up on him altogether.

Gazzetta dello Sport on Wednesday claim that Tuesday saw Inter reach out for ‘new contacts’ with Eriksen’s entourage, during which things were made clear.

The Italians have put forward a contract of €7.5m/year until 2024 for the Denmark international, but Tottenham remain the biggest hurdle.

The London side, clearly wary of losing one of the best players (on his day), still want €20m for him, while Inter are only prepared to pay half that, or €10m.

Gazzetta explain that Martin Schoots, the player’s agent, is now on a mission to try and close the deal, while in Milan, there is an ‘air of relaxation’, knowing the ‘long-awaited message’ can arrive at ‘any moment’.

In fact, the newspaper state ‘there are those who swear an important blitz can happen today, heading towards London’. 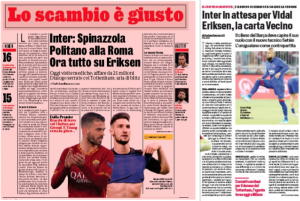 This is all echoed in Corriere dello Sport, who explain there’s a chance Schoots could be in Milan on Wednesday to try and get a deal over the line, as contacts are expected to take place in search of an agreement on a contract and commissions.

They also believe Spurs are asking for €20m, and the key to getting a deal done in January could be some sort of exchange with Matias Vecino, although Inter do value the Uruguayan above €20m, meaning Tottenham would have to add a little on top.

It’s still ongoing, and even if it doesn’t get done until the summer with Eriksen joining Inter on a free, there’s still a fair bit of work to be done.