Recurrently linked with Arsenal thanks to his agent and the Italian media, Jakub Jankto has come a long way from being unwanted a few years ago, now a star in Udinese’s side.

The Czech Republic international is now regarded as one of the better midfield talents in Serie A, something Arsène Wenger clearly predicted, having been described as one of the Frenchman’s ‘long-term’ targets in the past.

However, the Arsenal manager has yet to pull the trigger, and if he’s as intent in signing the 21-year-old as the media say he is, he might need to get a move on.

According to Corriere dello Sport, Jankto has now become AC Milan’s main target for the January transfer window, as they look to bolster their midfield, continuing their seemingly never-ending spending spree. 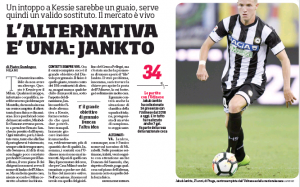 The Italian side see him as the ideal alternative for their new superstar Franck Kessiè, yet they might struggle to convince the Pozzos to let sell their starlet.

It would take a considerable investment, something AC Milan might not be able to do after their summer spending, and this is where Arsenal could have the upper hand.

We’ll have to wait and see, but, if he’s not careful, Wenger could see another long-time target slip through his fingers.