Wednesday was a busy day on the Christian Eriksen to Inter front, with Piero Ausilio, the Italian side’s director of football, travelling to London to try and get a deal over the line.

The idea was to have a meeting with Daniel Levy, but that never happened, according to Gazzetta dello Sport, with all contacts between the two clubs continuing to be ‘indirect’.

However, that didn’t stop progress from being made, as both Beppe Marotta and the aforementioned Ausilio told intermediaries to ‘improve’ the offer for the Denmark international from a previous €10m to €15m with an ‘ulterior slice of bonuses’.

The Italian newspaper state that, in London, the new bid is viewed as ‘more than interesting’, but it’s ‘inevitable’ that Daniel Levy will make a counter offer, with ‘whispers’ he could be ready to go down to €17m from his previous €20m.

A meeting also took place between Eriksen’s agent, Martin Schoots, and Ausilio on Wednesday, with Gazzetta reporting there is ‘optimism on the successful outcome of the deal’ despite Spurs ‘struggling’ to lower the price. 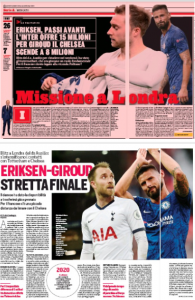 The €15m bid is also corroborated by Corriere dello Sport, who believe Levy is refusing to go down from €20m.

That being said, they don’t see the difference as an ‘insurmountable gap’, as an agreement would be ‘convenient’ for everyone.

It all certainly seems to be heading in the right direction.