It’s reported the Turkish side have already contacted Liverpool about signing the Swiss international and Gunes claim Gala are looking to loan the player for 18 months.

Shaqiri is said to be open about a move to the Super Lig as he wants to play regular first team football. The player has hardly featured under Jurgen Klopp this season, mainly due to injury, but his chances are likely to be further limited due to the return of Alex Oxlade-Chamberlain.

Gunes claim the Premier League club are open to parting ways with the 28 year old. 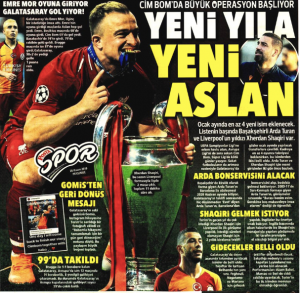 He recently returned to the Liverpool squad after injury and has played just 14 minutes of competitive football for the Reds this season.

With Euro 2020 just around the corner the Swiss forward will be wanting to get games, and a loan could be an option in the new year.

The former Stoke City player’s contract with Liverpool will expire in June 2023.