Friday saw big claims from Italy that Arsenal have reached an outline agreement with Fiorentina for the transfer of Dusan Vlahovic.

It was later reported that the Gunners have offered around €80m for La Viola’s striker. That offer came after a meeting in London between officials of the Premier League club and Fiorentina.

Such an offer seems over the top, given the asking over the past week has been put at around €50-70m. It doesn’t make a great deal of sense for Arsenal to go in so high, especially when it’s been reported the player doesn’t fancy a move there, and they don’t have his agent on their side.

There’s the possibility this is all some sort of transfer game-playing, in that Fiorentina can now use that €80m figure as a benchmark. Quite what’s in that for Arsenal isn’t clear, but perhaps it could help them with other targets.

Anyway, Saturday’s edition of La Nazione, the newspaper local to Fiorentina, says the club have made themselves ‘available to negotiate’ with Arsenal, making it clear they’ll consider a deal with the Gunners.

They mention the €80m figure, but 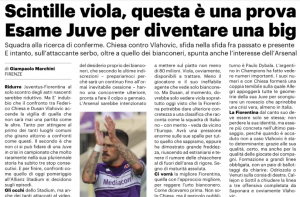 don’t claim any agreement, and insist the player, and especially his agent, have eyes for Juventus.