Two days ago, AS reported Eden Hazard is expected to be presented as a new Real Madrid player on Monday.

The same newspaper now takes a look at the situation and claims despite the confidence which existed at the Santiago Bernabeu a few days ago, Los Blancos failed to find an agreement with Chelsea for the Belgium international yesterday.

It’s stated the Blues ‘stood firm’ and contained the first attack from Real Madrid for their star.

Zinedine Zidane’s side outlined a plan to sign their priority target, but that has now changed, due to which the forward’s arrival at the Spanish capital club has been delayed. 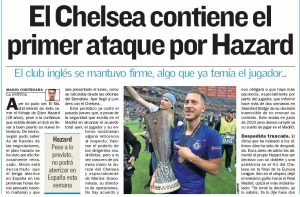 The 28-year-old and his camp value the power of the leaders of the La Liga side.

At the same time, they also know first hand how difficult it is to negotiate with the Europa League winners and especially with their director, Marina Granovskaia.

Another report from AS states Granovskaia is now the ‘great obstacle’ for Real Madrid in signing Hazard.

As the 13-time European champions continue to press the west London club, they will need in excess of €100m to secure Hazard’s signature. 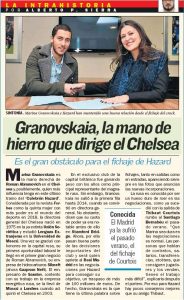 For now, Hazard’s immediate focus will be on the upcoming fixtures with the national team and with no agreement between the two clubs yet, patience is needed for his move to Real Madrid to take shape.