On January 13th, we covered claims from Italy that Fiorentina are interested in Pedro Obiang of West Ham United.

Fiorentina were ready to offer €8m plus bonuses for Obiang, but that just wasn’t enough. 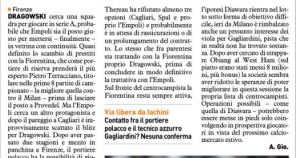 It’s explained the Serie A outfit’s chances of ‘trying to snatch’ the player look slim as Stefano Pioli’s side are slowly giving up hope of getting the former Sampdoria man.

Obiang has made 18 appearances in all competitions for West Ham this season, out of which 14 of them have come in the league.