The Italian press continues to believe that Roma can sign Leander Dendoncker in the January window without any problems to take him from Wolverhampton Wanderers.

So when reporting Roma’s wish to sign the player today, newspaper Tuttosport totally ignores Wolves, saying the Italian side would negotiate directly with Anderlecht.

Roma are looking for options to replace Daniele De Rossi, who’s injured, therefore they would need the midfielder as soon as possible. 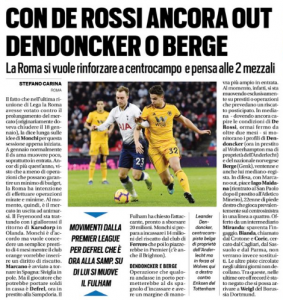 Roma wouldn’t like to pay for the transfer now, so they would have Dendoncker on loan and leave an option to buy for later.

With only four appearances for Wolves this season, the player’s dissatisfaction has been made public by his agent, but it would be interesting to see things made more clear this month.