Following the 23-year-old’s loan spell at Granada this season, he’s now said to be looking for a ‘new solution’ for his career.

A Bola points out that Herrera isn’t staying at the La Liga club, since they can’t afford the €20m buying option which had been previously agreed with Manchester City.

The Premier League champions have a partnership with Sporting, which was agreed last year, and that makes things easier for players to move between the clubs. Since Herrera has now joined the ‘list of loans’ at the English club, the move is seen as possible. 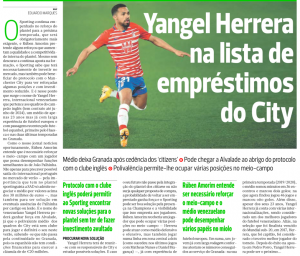 A Bola points out that Sporting are playing in the Champions League next season, and that could be a good showcase for Herrera. But the Lions don’t seem to be interested in a permanent move, and that means they must wait and see what happens in the summer.

It’s claimed Herrera will meet Manchester City officials and ‘study possible solutions’. Then in case he doesn’t stay in Pep Guardiola’s squad and there aren’t any offers for a sale, Sporting would have a chance to land him on a loan deal.