According to Gunes, Besiktas have identified Arsenal’s Takuma Asano as a potential target in this summer transfer window.

The Turkish side are looking to bring in a forward for next season after they allowed Cyle Larin to join Belgian side Zulte Waregem, and the club’s other back up striker, Mustafa Pektemek, left after his contract expired.

This leaves Besiktas manager Abdullah Avci with just Burak Yilmaz, and the Black Eagles are in the market for a forward.

Gunes claims Arsenal have put Asano on the transfer list and Besiktas are keen to sign the player on the cheap.

According to Turkish newspaper, Arsenal manager Unai Emery has included Asano in his training camp squad, but the Japanese striker is expected to leave the club after returning from his loan spell with Hannover. 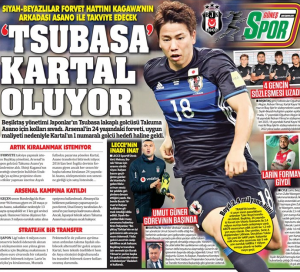 Besiktas are also looking to sign Japanese players to boost club’s value in the Far East, explain Gunes, and are also planning to re-sign Shinji Kagawa from Borussia Dortmund.