Fanatik report Trabzonspor are looking for the resources to complete a deal for Stoke City midfielder Badou Ndiaye.

We recently covered reports from Turkey that Karadeniz Firtinasi are following Ndiaye’s situation with the Championship club and they could make an offer to sign him in January.

Ndiaye is said to have a big admirer in Trabzonspor boss Unal Karaman and the manager has instructed his board to get a deal done for the Stoke City player.

Karaman reportedly believes Ndiaye’s previous experience in Turkey will help the club to improve in the second half of the season.

However, despite the ongoing negotiations it’s reported Stoke City have yet to lower their asking price for Ndiaye as they want a €1m loan fee from Trabzonspor for the remainder of the season. 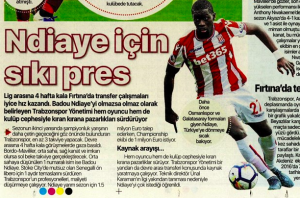 The Senegal international cost Stoke City €16m when they signed him in 2018, but following the Potters relegation to the second tier he was loaned out to Galatasaray last season.

His contract with Stoke City will expire at the end of June 2022.