Willian last week again made it clear that he’s happy at Chelsea and sees his future with the Premier League club.

Speaking to both the English and Brazilian media as he launched a project to help youngsters break into professional football, the 31 year old made it clear he, and his family, are very happy in London and that he still has ambitions with Chelsea.

One of those is to win the Champions League with the Blues, and he hopes to have success under Frank Lampard, the fifth manager he’s worked under since moving to Stamford Bridge.

Chelsea hold a lot of the power and Willian’s future will largely be dependent on what the club off in terms of a renewal, especially given the player’s age.

Monday’s edition of Tuttosport brings forward another option. They state Juventus are looking at the possibility of signing Willian on a free transfer next summer, when his 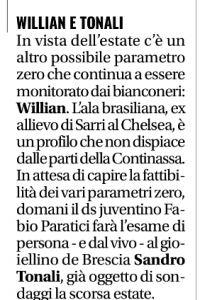 Juve have been kings of the free transfer in recent seasons, and are hoping to take advantage of opportunities again in the coming markets.