Fanatik claim Fenerbahce have made a loan offer for Leicester City defender Caglar Soyuncu as the Turkish side look to conclude a deal.

It’s reported that Fenerbahce have made a two year loan offer to Leicester City for Soyuncu but the Foxes would have the option to recall him at the end of next season.

Fenerbahce are in the market for defensive reinforcements this summer as they work replace Martin Skrtel and Roman Neustadter. Both central defenders look set to leave the Yellow Canaries in this transfer window.

Soyuncu is said to be keen on playing for the Super Lig club as he has concerns about losing his place in the Turkish national team and possibly missing out on the Euros next year.

However, any decision made by Leicester City could depend on the future of Harry Maguire and whether the England international remains with the club. 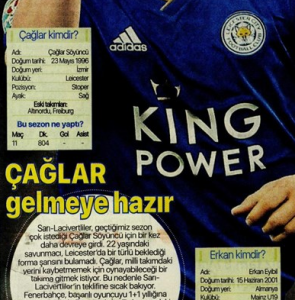 The Turkish defender joined Leicester City last summer from Freiburg for €21m but he failed to have much impact during his first season.