Chelsea star Hakim Ziyech is at the top of AC Milan’s wishlist this summer, with a move for Everton’s James Rodriguez unlikely at this point.

That’s according to Corriere Dello Sport, who say the Colombian’s wage demands rule out the Everton man for now.

Milan are on the hunt for a new number ten after losing Hakan Calhanoglu, who made the surprise decision to join rivals Inter Milan.

Ziyech has regularly been named as a target over the past few weeks, with it reported that Chelsea are happy to let him go after a disappointing first season in England.

That’s been followed by the suggestion that any negotiations will be weeks in the making, particularly as Milan are negotiating for Olivier Giroud and Tiemoue Bakayoko at the same time.

Corriere Dello Sport pick up on that thread today and state that Ziyech occupies ‘the first place’ on the list of Milan’s preferences.

However, it will be a ‘long and difficult operation’ because the club’s management are aiming to ‘snatch him on loan’ at the end of the market. 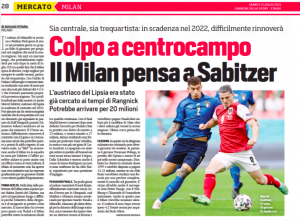 It’s felt that Milan ‘could be the ideal solution in a few weeks’ time, perhaps when Chelsea soften their stance towards a loan deal.

Rodriguez, meanwhile, is a name that ‘has emerged’ from Colombia, but there has been no confirmation from Via Aldo Rossi that he’s a serious target.

For the Everton man, it is ‘a question of salary’, the suggestion being that his current pay packet is too much for Milan to match, and so he’s been ruled out.