Ever since it was made clear by José Mourinho that he wouldn’t be counting on Juan Foyth this season, there have been rumours of a loan move for the Argentine.

We’ve had Valencia reportedly interested, as well as some other La Liga sides, but the latest to join the fray, according to RMC Sport, are Rennes in France.

The Ligue 1 side have been looking for a centre-back for the entire transfer window, seeing targets such as Mohamed Salisu head elsewhere, and the French outlet are claiming they have now turned their attention to the Tottenham centre-back.

He’s one of a few options, joining Juventus’ Daniele Rugani and Strasbourg’s Mohamed Simakan, but the latter’s arrival is deemed ‘complicated’ for now. 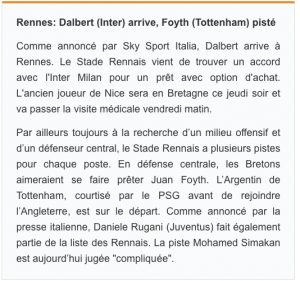 It’s claimed Foyth is ‘on the exit path’, suggesting a deal could be done, and Rennes ‘would like him to be loaned’ if possible.

It’s new and fresh, and we’ll be keeping an eye on it going forward.