About a month ago, we covered a story from Italy claiming that Inter Milan had taken a sudden interest in Arsenal’s Granit Xhaka.

The Switzerland international has had a complicated second half of the season filled with ups and downs, but the 26-year-old has remained integral to Unai Emery’s plans, and will be expected to start the Europa League final in a couple of weeks.

Corriere dello Sport on Thursday look at Inter’s plans for Antonio Conte, which include Romelu Lukaku and Manchester City’s Danilo, before mentioning Xhaka towards the end.

The Italian newspaper confirm the previous report, in that the Serie A side have put the Arsenal midfielder on their summer list without him being one of their priorities. 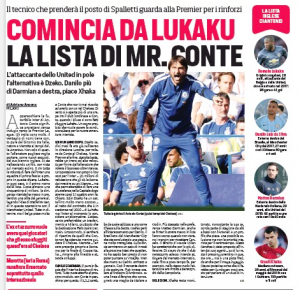 They explain that people at the club ‘like his profile’ and refer to him as a ‘potential solution’ for their midfield going forward.

Without jumping to too many conclusions from the little Corriere give, our guess is any move for Xhaka would be a complicated one for Inter, meaning they’ll likely leave it on the back burner until they’ve sorted more pressing matters first.