Juventus’ quest for a new striker continues to be reported by the Italian media, with Tottenham Hotspur star Harry Kane being in the spotlight lately.

This time, Tuttosport comes up saying the Old Lady should spend up to €200m on fee and wages in case they decide to go for the 26-year-old.

They say Kane seems eager to start a new adventure at a new club, with Tottenham’s elimination in the Champions League giving his wish a boost.

Other clubs who’d like to sign him, such as Manchester United and Manchester City, would have some disadvantages in the race, such as their form in recent years or a sanction from UEFA. 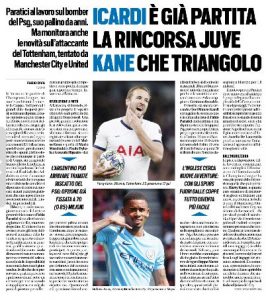 That’s why Tuttosport, as usual, considers Juventus to be in the lead for the striker, even though there are no details of bids or talks for him so far.

In case they fail to get him, then the ‘domino effect’ would lead the Italian side to go for other targets, such as Manchester City’s Gabriel Jesus.