Real Madrid ‘know the interest’ of Manchester United to sign Raphaël Varane, according to Cadena Ser.

There’s still no clarity over the defender’s future as he will enter his final year of contract in less than two weeks.

Los Blancos want to retain the 28-year-old and offered him two renewal proposals, to which, the France international replied he ‘wanted to know’ the team Real Madrid will have for the future.

This has made the La Liga side understand the centre-back will not sign a new deal, and Carlo Ancelotti’s side believe they will have to ‘find a satisfactory exit for both parties’.

At the Bernabéu, they are aware of interest from the Red Devils and Paris Saint-Germain to secure the player’s services.

Friday’s edition of ABC also has an update on the former Lens man’s contract situation, but there’s no mention of United or PSG.

The newspaper states the player has ‘rejected’ the renewal offers and ‘opts to be traded’ after Euro 2020. Real Madrid, for their part, will ‘make a last effort’, but will ‘not go crazy’ to retain him.

Varane earns a net annual salary of €5.5m and his club are ready to offer him a four-year contract worth €7m per season. 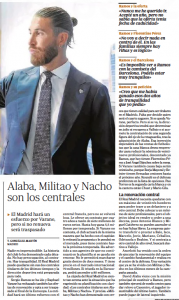 If he doesn’t respond, the Spanish side will make him available in the market. This comes as encouragement for United and PSG.

ABC add Real Madrid have ‘warned’ the player’s agent he will not continue at the club without a renewal because they don’t want Varane to leave as a free agent in 2022.

To sum it up, Manchester United and PSG are in the picture to sign Varane and without a renewal, Real Madrid want to sell him this summer.