Jota’s good start to the season at Celtic hasn’t gone unnoticed in Portugal, as the media from the winger’s home country is often bringing headlines about his quick success in Glasgow.

The player has eight goals and six assists in only 18 appearances for Ange Postecoglou’s Celtic so far, and that of course generates some rumours about his loan from Benfica becoming a permanent move next summer.

Celtic have the option of buying Jota from the Eagles for a fee of €7.5m, and recent claims from the UK press have been saying that the Scottish side want to trigger it as soon as possible.

So as A Bola covers the situation today, they point out that anticipating the winger’s permanent departure would be something good for Benfica as well. 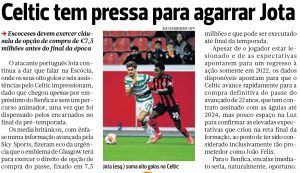 The newspaper writes that from the Eagles point of view, receiving the money from Celtic sooner than expected would be ‘naturally opportune’, as that would help their financial situation.

Jota hadn’t been really impressive at Benfica or during his loan at Real Valladolid in the past.

That’s why his success at Celtic, especially with this chance of an anticipated permanent move, is taken as a surprise by the Portuguese media.