Before Liverpool decided to buy Konstantinos Tsimikas, the Greek was wanted by a variety of clubs, including Napoli.

In the end, it’s Jürgen Klopp’s side who took the decision to give the left-back a move to a higher division, and while that’s all well and good, it’s not really useful if you don’t play.

With Andy Robertson in front of him, that was almost always going to be the case, which is why it wouldn’t be surprising if the 24-year-old was getting the itch to play more regularly.

That would have to take place somewhere other than Anfield, and the south of Italy could be the ideal place for him.

Already a target for Napoli in the past, the defender remains on their wishlist, with Corriere dello Sport explaining that with a need for a left-back, ‘there’s always the Greek Tsimikas’. 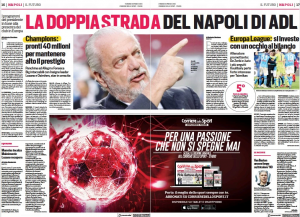 The player is said to ‘appeal’ to the Serie A side, and the fact the ‘he doesn’t play much at Liverpool’ certainly works in their favour.

Bought for an initial £11.7m, Tsimikas would, you would think, cost Napoli something similar to pry him away from Anfield, all depending on what Klopp has planned for him going forward.

If he sees him as part of his plans to forget about this season and going into the next with renewed vigour to challenge for the Premier League once again, then the Italians don’t really have much hope.