It seems that Tottenham Hotspur would have to work really hard in case they’re interested in bringing Hector Herrera to the club.

With the Mexican midfielder’s contract with Porto expiring at the end of the season, there’s reportedly a big race to sign him, with Roma said to be in the lead for now.

On Tuesday, Italian outlet Gazzetta Dello Sport claimed that the Giallorossi could bid up to €15m to get the player in January. And for personal terms, they would offer the player a salary of €7m.

Roma would spend all that money in order to avoid competition next summer, with Tottenham and Inter Milan getting a mention as the main interested sides they want to get ahead of. 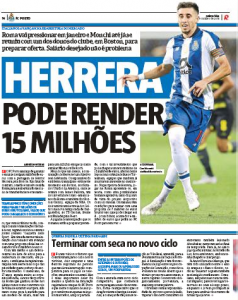 Now newspaper O Jogo reacts to it today, and considers Roma’s offer to be pretty good. Porto would love to get €15m for a player who could walk for free six months later, and from Herrera’s point of view, the chance to join the Italian side is good, both financially and sportingly.

So in case Spurs want to be kept alive in this race, at least they now know seems more than acceptable.