Fotomac report Besiktas have already started their transfer business for next season, and it’s stated they’ve identified Aston Villa’s Trezeguet as an option.

The Egyptian winger could reportedly leave Aston Villa if they are relegated from the Premier League, and Fotomac claim if that happens, Besiktas will make a two-year loan offer to the English side.

Besiktas manager Sergen Yalcin is a big fan of the player as he feels he could make a big improvement to his side for next season. However, any move for Trezeguet will depend on Villa’s top flight status. 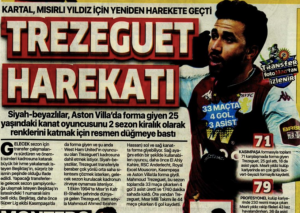 Trezeguet joined Villa from Kasimpasa at the start of the season and has been a regular figure in Dean Smith’s squad since his arrival.

He’s been heavily linked with a return to Turkey, with recent claims linking him with a move to Besiktas’ arch-rivals Galatasaray.

The 25 year old has made 33 appearances for Aston Villa in all competitions this season, scoring four goals. He has also provided three assists to his teammates.

Trezeguet’s contract at Villa Park will expire at the end of June 2023.

Arsenal have ‘officially asked’ for midfielder – Club ready to sell for €20m+, ‘channels are open’

Arsenal have ‘officially asked’ for midfielder – Club ready to sell...