With 43 appearances in all competitions this season, it’s fair to say Joao Cancelo has been an important part of Manchester City’s successes.

The Portuguese defender’s versatility has been a key attribute for Pep Guardiola, who has used him either as a right-back, a left-back, a central midfielder or a right midfielder, and having featured in most Champions League games, he could very well start the final.

Whether he does will be up to his manager, whom Cancelo, like so many others, admires, but what follows is equally important.

Contracted to Manchester City until 2025, there’s very little chance of the defender leaving the Etihad in the upcoming transfer market, but that doesn’t mean he hasn’t given his future some thought either.

Speaking to Gazzetta dello Sport, Cancelo was asked how he imagined the ‘full stop’ of his career, meaning how he believed it would end. 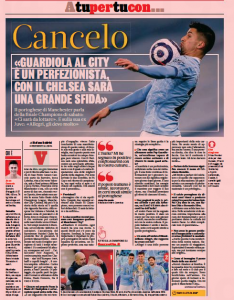 Without giving it a second thought, he replied: “I would like to end at Benfica. It is the team where I started to get serious and the club that I have always supported. I am a Benfichista at heart. One day I hope to wear that shirt again. For now, I enjoy Manchester City”.

So, no transfer just yet, but when his thirties hit and it’s time for him to think about the next step in his career, having already played in Italy, Spain and England, Cancelo will be turning his attention to a return to Portugal.

After all, he was at Benfica for a good seven years, joining them from FC Barreirense in 2007 before leaving them for good in 2015 after a year on loan at Valencia.