It’s reported the Turkish club will invite Trezeguet’s agent William D’Avila to Istanbul next week and both parties will hold talks with regards to a potential move for the player. Galatasaray are hoping to complete a loan deal for the 25 year old, with an option to buy.

Aston Villa’s hopes of staying up took a hit following their draw against Everton, and Fanatik claim that Gala’s hand will be much stronger if Villa are relegated from the Premier League. 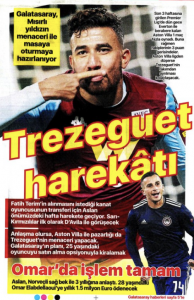 Along with Galatasaray, fellow Turkish Super Lig club Fenerbahce are also said to be interested in the player’s services, but recent reports stated he could stay in the Premier League even if Aston Villa drop down to the Championship.

Trezeguet has made 38 appearances for Dean Smith’s side this season, scoring six goals.

His contract at Villa Park will expire at the end of June 2023.