Expected to lose Mario Balotelli at the end of the month when his six month contract expires, Marseille are in dire need of a new goalscorer, and André Villas-Boas, their new manager, has someone in mind.

That player is Salomon Rondon, whom he managed during his time at Zenit, the West Brom striker who spent last season on loan at Newcastle United under Rafa Benitez.

Newcastle are thought to be keen to keep the player, but so far Benitez hasn’t managed to sort his own future out and Rondon would likely come after that.

La Provence, who tend to be quite good when it comes to Marseille, state that Villas-Boas and the Ligue 1 club are ‘extremely interested’ in the 29-year-old, seduced by his physical attributes.

Scoring 28 goals in 58 games under the Portuguese manager, the West Brom forward continued the good form he’d started in Russia at Rubin Kazan, before being sold to West Brom for £15.3m in 2015. 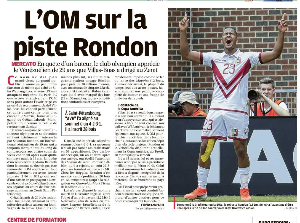 In France they believe Rondon’s contract is expiring at the end of this month, a mistake also made in Turkey with regards to interest from Super Lig clubs.

The Ligue 1 club, wanting to get ahead of the competition, could ‘accelerate’ for the forward in the next few days.

But if they think he’d be free, they’re in for a shock, which would hand an advantage to Newcastle United.

The Venezuela international is currently representing his country at the Copa America, where he was recently unable to break the deadlock in a 0-0 draw against Peru.