Italian newspaper Tuttosport this week has a piece saying Milan are ‘hunting’ for a regista, as they want a midfielder who can protect their defence.

There are a few names on the table, but the Rossoneri are reportedly setting their eyes on Arsenal, where three different players are attracting their interest.

Two of them are still Gunners this season: Grant Xhaka and Lucas Torreira. Both of them have been linked to Milan in the past few months, and it’s the Swiss star who’s said to be in pole position.

It’s claimed that Xhaka would fancy a move to Serie A, and Arteta’s arrival should not be good for him, due to the tactical system he’d use. 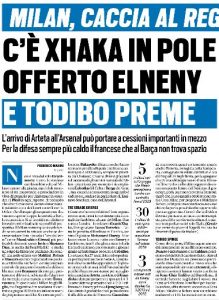 The third option would be Mohamed Elneny, who left the Gunners last summer to join Turkish side Besiktas on a one-year loan deal.

Milan don’t seem to be in a hurry, since their biggest worry is to replace Lucas Biglia, whose contract expires in June 2020. So they should be able to take their time until they choose which Arsenal midfielder they really want.

There should also be enough time for Mikel Arteta to sort things out and convince some of these players to stay at the club, but that’s not something mentioned by Tuttosport.