Idrissa Gana Gueye didn’t have the best of Fridays. His Senegal team were beaten by Algeria in the final of the Africa Cup on Nations.

However, he’ll be much happier with what’s happening on the club front. The midfielder was keen to leave Everton for PSG in the winter market, and it was no surprise the French club returned this summer.

Manager Thomas Tuchel is thought to be a big fan of the Everton player and he’s been pushing for the signing. Everton and PSG have been continuing talks, and L’Equipe claim there’s been ‘significant progress’ on the transfer.

So much so that there’s a hope it can be sorted out by Monday, and Gueye the complete his transfer to the Ligue 1 champions after a break. 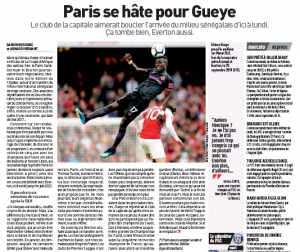 It’s reported Everton asked for €40m in January, and PSG wouldn’t go higher than €35m. The Toffees haven’t come down much from that figure, and there’s thought to be a compromise in the works.