Manchester City defender Eric García was a target for Ronald Koeman in the last window, but Barcelona failed to complete his signing.

The 19-year-old is in his final year of contract at the Etihad and already decided against signing an extension with the Citizens in August.

Pep Guardiola recently stated he and his side will continue to try and convince the centre-back to sign an extension with City. That may not be an easy task, if a report from Mundo Deportivo journalist Miguel Rico is to be believed.

According to Rico, the La Liga side are in ‘almost daily contact’ with García’s agent Iván de la Peña.

The Spain international came through the Catalan club’s famous academy before moving to Manchester three years ago. Rico adds the Blaugrana ‘remain convinced’ the player will ‘end up returning to the Camp Nou’.

It’s not clear whether the teenager will arrive at Barcelona in January or after the end of this season. 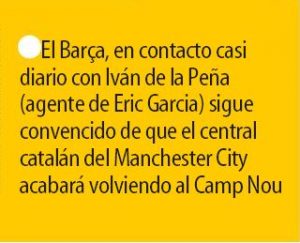 On Thursday, Sport explained Koeman is ‘more than likely to order’ his employer to sign García in January.

It was also stated a potential deal in the winter market may be complicated if the election for the successor of Josep Maria Bartomeu is not held before the end of this year.