Turkish newspaper Takvim claim Galatasaray have identified West Ham United forward Albian Ajeti as a target ahead of next season.

Gala will be in the market for a striker this summer with Brighton and Hove Albion loanee Florin Andone set for a return to his parent club.

It’s claimed the West Ham striker could be a good signing for Galatasaray and that the Turkish giants are looking to loan him for the next campaign.

The other options for Galatasaray are Fedor Smolov and Munas Dabbur, but it seems Ajeti is Fatih Terim’s preferred choice at the moment. 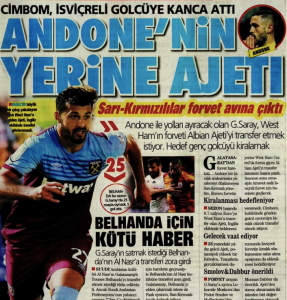 After joining West Ham from Basel for €8.7m last summer, Ajeti hasn’t had the best of spells with the London club.

He’s only managed to make 11 appearances for Hammers in all competitions, and is yet to score a goal.

His contract with West Ham will expire at the end of June 2023, but his future at the club looks uncertain.

Nottingham Forest give up on Brazilian midfielder – Offer not good enough

Liverpool player ‘not a champion’ – Slammed for simply ‘filling trophy...

Nottingham Forest give up on Brazilian midfielder – Offer not good...