Nîmes are currently 19th in Ligue 1 and five points behind 17th place Metz. They have struggled to score as they average less than a goal (13 goals in 18 matches) per game.

According to L’Equipe, Nîmes are looking to strengthen their attacking division in the winter market and Huddersfield Town’s Steve Mounié has emerged as one of the targets.

From the list of players sought by Nîmes, the Terriers striker is included along with Kayserispor’s Paul-Georges Ntep, Lille’s Thiago Maia and free agent Emmanuel Adebayor.

The French club appointed Reda Hammache as their new sporting director and he will have a limited budget at his disposal to help Nîmes avoid relegation this season. 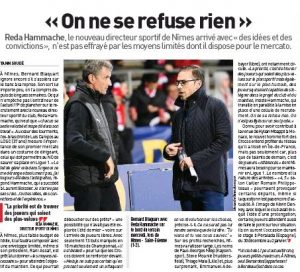 Despite that, Nîmes president Rani Assaf is ready to give “the necessary means” to achieve transfer objectives so that it can help the club save their campaign.

For now, Mounié is one of the players sought by Nîmes and there isn’t any additional information to suggest if either the Benin international or Huddersfield Town would be open to a transfer in January.