You won’t have missed the news that dropped on Monday night: Sergio Agüero will be leaving Manchester City at the end of the season after 10 years with the Premier League side.

It wasn’t all that surprising, considering how the latest campaign has gone for the Argentine, with injuries hurting his playtime, but it’s an important story nonetheless, especially when it comes to where he goes next.

Some big claims have already been made, such as Manchester United reportedly already offering him a contract, but that doesn’t seem entirely believable, as we pointed out, with some far more realistic destination being discussed in Wednesday’s Gazzetta dello Sport.

For them, there are three clubs Agüero could end up at next season: Barcelona, Juventus and Paris Saint-Germain.

After 10 years with Manchester City, a move to another Premier League club would be somewhat disrespectful, especially with a statue of him being built, meaning an adventure abroad before returning to his home country would make the most sense.

Each club present their upsides, with the Catalans allowing him to play with Lionel Messi at club level, while a move to France would see him be managed by compatriot Mauricio Pochettino, who is said to admire the striker following years of suffering against him during his time in charge at Southampton and Tottenham.

As for Juventus, Gazzetta explain they are the ones who have ‘gone further’ than the other two so far, with the ‘first enquiries dating back to a couple of months ago’.

Wages will forever remain an issue when players switch from the Premier League to Serie A, and Agüero is no different, having earned €15m/year at the Etihad, and while ‘he doesn’t want to lower his target much, the figure will also depend on the length of the next contract’.

Basically, the longer the assurance of him getting paid, the more he’ll be willing to drop his demands. 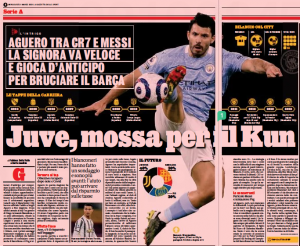 Either way, ‘from the first approaches, it became clear he is asking for at least €10m/year net per year’, which would cost Juventus €15m/year gross.

A bonus is that he already has a Spanish passport, getting it in 2010 when he was still at Atlético Madrid, thus allowing him to keep a non-EU slot for Juventus on the transfer market going forward.

Going back to the competition, Gazzetta believe the ‘most dangerous for Juventus’ are Barcelona, due to the great friendship between Agüero and the aforementioned Messi.

There are counter-arguments, such as whether the superstar will remain in Catalonia beyond the current campaign, as well as the financial struggle the club currently find themselves in.

As for Paris Saint-Germain, ‘it cannot be ruled out that Leonardo will focus on Sergio to land him in Paris’, meaning that if Juventus want their man, they need to act quickly, which Gazzetta point out by ending their article with the statement that the Serie A side ‘is in a hurry’.