Mundo Deportivo claims the La Liga winners are aware of the interest from the Red Devils, Everton and Lyon in the Colombian international, and are confident Jose Mourinho’s club will make an offer.

Barca think Manchester United would pay the most so are said to be delaying the player’s sale and waiting for the club to ‘present a formal offer’ for Mina.

So far, there has been no contact between Jose Mourinho’s side and the Camp Nou, but Mundo Deportivo say ‘the fact is’ Barca know there’s been contact with the player.

The Spanish champions, on the other hand, have received several offers from Everton and Lyon, who are demanding a quick response as a failure to sign the centre-back will see 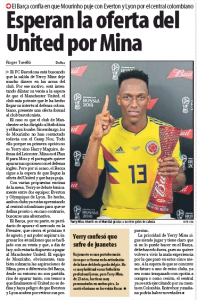 them look for other alternatives.

Mina has a €40m asking price, all of a sudden, and his employer believes only the Old Trafford club will be able to meet that.

Mundo Deportivo’s article ends by saying ‘Between now and tomorrow there could be news’.