Over the past few days, there has been an intent to build up Leicester City’s interest in Cengiz Ünder, currently contracted to AS Roma.

The Turkey international is widely seen by the club as an easy way to make money, since he’s still young, has potential and has attracted a number of big sides in the past.

While Everton were said to be keen earlier on in the transfer window, their interest has somewhat dwindled, it seems, as Carlo Ancelotti prioritised other areas of his squad in the transfer market, namely his midfield.

That appeared to pay off in the first game against Tottenham, as the Toffees walked away with the three points, but now other avenues could be explored. 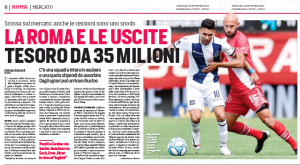 This is why Corriere dello Sport claim on Wednesday that AS Roma, who know Ünder has ‘ended up in the sights of Leicester and Hertha Berlin’, are ‘waiting for an offer hoping for the insertion of Everton to increase the price of the 23-year-old’.

After all, a small auction between the Foxes and the Toffees for the player would certainly do that, but it remains to be seen if Ancelotti and Marcel Brands come back for an attacker who still has a lot to prove at the highest level, especially when it comes to his consistency.