At this stage of the season, big clubs are normally planning signings they will make in the summer, with local newspapers bringing news on these possible targets. But things happen quite differently in Portugal.

It’s no secret that Benfica love making fortunes when selling their players, and in a big article written by O Jogo today, the outlet shows the millions the Eagles are already counting on for the summer market.

Benfica have a few players loaned out with an option of a permanent transfer, and André Carrillo is one of them. Just like Watford fans are expecting the Peruvian international to stay at the club after the end of the season, it seems the Portuguese side have the same in their minds. 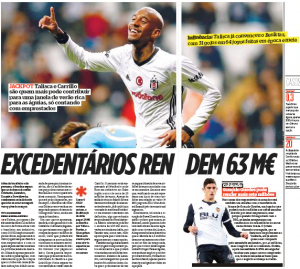 O Jogo claims that Benfica president Luis Filipe Vieira expects the Watford transfer to be made for around €20m, money which would make a big difference to the club’s budget.

Even though the player hasn’t been much used since the departure of manager Marco Silva, there’s still some confidence Watford will have be positive about him at the end of the season.

Maybe all this hope from Benfica could give Watford a good reason to try to sign Carrillo for a smaller fee.

“Mamma mia…” – Agent reacts to news that club’s star could...

Claim Aston Villa player’s exit is imminent after being left out...