Tottenham Hotspur manager José Mourinho has long been an admirer of Gareth Bale and he publicly spoke of his admiration for forward during his time at Manchester United.

Mundo Deportivo reported on Monday the Portuguese tactician ‘would be delighted’ to secure the 31-year-old for Spurs.

Today’s edition of the same newspaper claims the La Liga winners have not received any proposals for the Welshman, but they hope the north London club will make an offer for him.

The attacker didn’t want to travel to England for the Champions League knockout tie against Manchester City last month, and it’s stated that didn’t go down well with Zinedine Zidane, who has informed the club he no longer wants the ex-Spurs star in the dressing room.

The report explains a new chapter of the open war between the two parties will be lived at Valdebebas, while Real Madrid expect to meet the player’s agent, Jonathan Barnett, this week to ‘defuse the situation’.

Bale earns €15m net per season, and it will be difficult for Real Madrid to offload him, unless he agrees to take a pay cut. There have been rumours of the Spanish giants planning to terminate his contract by paying him a year’s salary.

Mundo, however, state the European giants are not planning to let Bale leave on a free transfer and are looking for a fee around €25m, the same price Everton paid for James Rodríguez.

Bale’s exit from Real Madrid will be hugely complicated if he refuses to take a pay cut. The wideman is aware he must settle for a place on the bench for the remaining two years of his contract, if he decides to continue at the club. 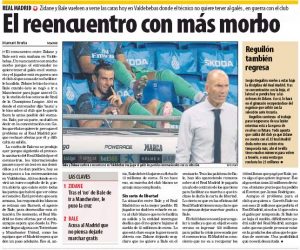 Waiting for a Tottenham offer may not be the best plan from Madrid. Should Spurs even have an interest, it’s likely they’d use all the leverage possible to sign the Welshman on a free transfer, and also expect Madrid to subsidise any salary issues.