Home Europe Club ‘hope to’ sell player to Liverpool for ‘around €20m’ before transfer...
SHARE

Benedikt Howedes is still several hurdles away from becoming a Juventus player, according to Gazzetta dello Sport.

In their Satrurday edition, the Italian newspaper report Juve’s initial offer has ‘failed to impress’ Schalke, so, regardless of what’s being reported in Germany or elsewhere, there’s no deal yet for the defender to move.

Liverpool are said to be part of the problem. Schalke still ‘hope to’ sell Howedes to Jurgen Klopp’s club for ‘around €20m’ before the close of the window, which is much more than Juventus are willing to put forward.

Gazzetta say Juventus’ first offer is €2m for a season long loan and then a right of redemption of €8m. That doesn’t sound such a bad offer, if Schalke are being fair with Howedes, and €20m from Liverpool is certainly ambitious from the Bundesliga club.

Howedes is 29 years of age, he recently had the Schalke captaincy taken away from him 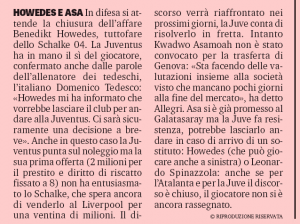 because he’s not a nailed on starter any longer. That felt harsh, considering Howedes is a symbol of Schalke, came through their academy, and has refused a string of lucrative moves.

But Schalke are Schalke and they did it, and Howedes is now keen on a move. Given all his service, and that it’s Schalke pushing the player aside, it may be considered fair to let him go where he wants for a reasonable, or even token, fee.

Liverpool interest may be overstated, but even if true, €20m seems over the top. Klopp could surely get him for less, if Howedes is as keen on Liverpool as he is on Juventus.