Juventus ‘hope’ that Newcastle United can turn their interest in Adrien Rabiot into a ‘concrete proposal’ in the January transfer window.

That’s according to Tuttosport, who cover how the Italian side would be happy to sell Rabiot even though he’s a prominent member of the first-team squad under Maximiliano Allegri this season.

The newspaper explains that while Allegri ‘plays him all the time’ because he’s the only real option in the squad, there are doubts about the player.

That’s because his performances have hardly been scintillating, so he is not considered ‘unsaleable’ as a result.

His current contract expires in 2023, and there are no signals from Juve that they want to extend it, so that ‘fuels the debate’ about his future.

His current salary of €7m a year net plus bonuses ‘weighs on’ the Juventus budget, and the Italian club would be more than happy to get rid of that if an offer for Rabiot arrives.

That’s where Newcastle come into it. They’re planning the first stage of their major rebuild in January following the takeover, and Rabiot is one of the names to have been linked. 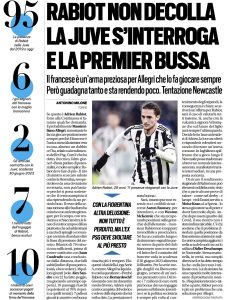 At the moment, they are just showing ‘normal interest’, but the hope is that can transform, via ‘intermediaries’, into a ‘concrete proposal’.

Should that arrive, Juve will listen, evaluate it and then respond willingly to try and find a ‘common understanding’ with his mother, Veronique, who acts as his agent. She will be the one who decides the player’s future based on his wishes but is described as a ‘volcanic’ character.

That’s who Newcastle will need to deal with, but Juventus are clearly open to a sale with the midfielder now considered ‘more of a problem than a solution’ for Allegri.