After pushing hard to sign him during the January transfer window, it was almost inevitable that Paris Saint Germain would return for Idrissa Gana Gueye this summer.

It’s well known that Thomas Tuchel is an admirer of the Everton midfielder and it seems six months later he’s convinced the Ligue 1 champions to really push for his signature, but now it’s claimed there could be competition from Manchester United.

Le Parisien report today that new Sporting Director Leonardo is as keen on Gueye as his manager is and the club hope to ‘conclude his transfer in the coming weeks’.

The newspaper says that negotiations with Everton have already begun and that the Toffees have made it known they would not oppose Gueye’s departure.

However, the Toffees are likely to stick to their guns on asking price, which is believed to be €40m. That’s an issue for PSG, who were unwilling to pay that price in January and maintain that stance this summer.

In fact, Le Parisien say that Leonardo ‘does not seem ready to go crazy’ to sign Gueye, suggesting PSG will try to lower that asking price as much as possible.

They may have to move quickly, though, with Gueye also attracting interest from elsewhere, including Manchester United.

Gueye is remaining focused on the final of the Africa Cup of Nations but a source close to him has admitted he will look at his options, and that PSG are not the only club interested.

The future of Idrissa will be decided after the CAN,” the source told the newspaper. 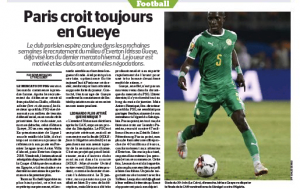 “PSG is a serious track, but he focuses on the final and will look at his future from next week. It is a project that may interest him, but other clubs are also in the race.

“We must remain cautious, as the last transfer window has shown. On the 31st of January, we thought it was going to happen. There was some disappointment, but Idrissa was very professional and was able to move forward quickly for a very good second half of the season.”