Dodi Lukebakio is on a season-long loan at Fortuna Düsseldorf from Watford.

Having scored 14 goals and registered three assists, the winger is now drawing attention from Bundesliga clubs, which is why Kicker reported last week that Fortuna’s chances of retaining him on a temporary deal for one more season look slim.

SportBild claims Schalke and RB Leipzig are interested in the 21-year-old, and his current club’s chances of signing the attacker, either on loan or a permanent deal are ‘not representable for Dusseldorf’.

In regards to interest from other two clubs, it is claimed that Schalke have opened discussions with Watford and even held ‘concrete talks’ with them for their player.

Leipzig, on the other hand, are trying to use Champions League football to lure the Belgian to join them. 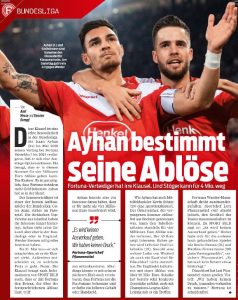 The report explains that Javi Gracia’s side will need a fee in excess of €20m to sanction Lukebakio’s sale in the summer.

It’s clear the forward’s loan spell with Fortuna will now help him join another club on a permanent transfer.