Three days ago, we carried a report from AS, who explained that Christian Eriksen’s idea is to not renew his contract at Tottenham Hotspur with just over a year left on his current deal.

Saturday’s edition of the same newspaper takes a look at the possibilities around whether or not the north London club will sell the 27-year-old, if they go on to win the Champions League.

They made it to the last four of the European competition at the expense of Manchester City and now face Ajax over a two-legged tie in May.

If the north London club go on to win the Champions League, they will earn €100m as prize money and this will be added to the overall funds, but that is unlikely to solve one of their problems.

AS say the Premier League club’s economic situation isn’t great, and their reasoning for this is the cost of the new stadium.

Having named it Tottenham Hotspur Stadium, they are yet to find a sponsor for the naming rights.

AS claims that even if Tottenham win Europe’s elite club competition, ‘debt forces’ them to sell the Denmark international, who is one of the summer objectives for Real Madrid.

Los Blancos are interested in Eden Hazard, who has one year left on his current deal at Chelsea. 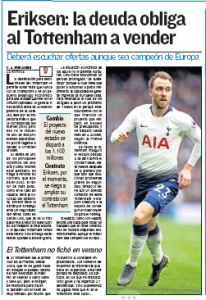 His contractual situation with the Blues is a ‘trump card’ for Real Madrid and they are expected to repeat the same with Eriksen.

AS are of the view the English club will be forced to sell Eriksen because having made up his mind to not sign a new contract, Spurs cannot afford to let him leave as a free agent in 2020.

This may have some basis, largely around the contract situation, but a lot of it sounds like wishful thinking from AS.