It’s been over a week since Carlo Ancelotti left Everton for Real Madrid and the Merseyside club are yet to name his successor.

On Tuesday, BeFoot reported the Toffees are ‘very interested’ in appointing Christophe Galtier as their new manager.

The 54-year-old expressed his desire to leave Lille, just days after guiding them to title success.

OGC Nice are keen on hiring the Frenchman and there exists an agreement in principle between the two parties. However, they haven’t signed anything.

‘Everything is open’ with the coach’s future, and the Premier League side want to play their cards to bring him to Goodison Park. Everton have started discussions with Galtier’s representatives, according to the claims, and are willing to offer him a salary higher that what has been proposed by Nice.

Galtier wants to leave the French champions, but he’s still under contract with them until 2022, which is why he hasn’t yet signed with another club.

L’Equipe now state ‘no club have contacted Lille’ for Galtier, amid claims Everton are keen on hiring him. 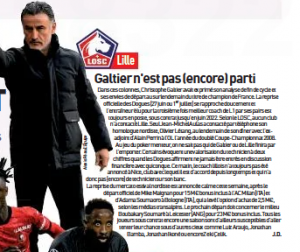 The newspaper states: ‘In the game of poker, we do not know which of Galtier or Lille will end up winning. Some talk about a double-digit valuation, while Les Dogues [Lille] say they’ve never entered into a financial discussion with anyone’.

As things stand, Galtier has ‘not yet left’ Lille. He has an agreement in principle with Nice and with Everton now joining the race, it remains to be seen how this case would evolve.