Two days ago, TuttoMercatoWeb explained Manchester United, Everton, Southampton and clubs in Serie A have made contact over signing the Celtic U18 goalkeeper.

It was also explained the 17-year-old, who has an Italian passport [due to his father], ‘would like to try the Italian experience and arrive in his homeland’.

The duo have contracts until 2022 and the Albania international is currently sidelined with a physical problem.

It’s claimed there has been ‘no contact’ over extending Strakosha’s stay in Rome beyond next season, which has given birth to rumours of his possible exit from Stadio Olimpico in the summer.

The situation has seen Simone Inzaghi’s side linked with a few keepers. According to the report, Vanja Milinković-Savić, brother of Lazio star Sergej, is one of the targets identified by the Italian capital club. 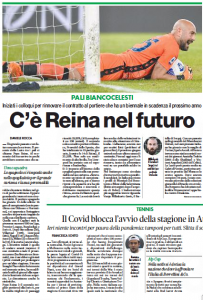 Lazio are also looking at younger players abroad and that’s when Celtic’s Vincent Angelini gets a mention along with Shakhtar Donetsk’s Anatoliy Trubin.

Angelini signed his first professional contract with the Scottish club in August 2019. He is the grandson of former Celtic player David Hay.

It remains to be seen whether the 17-year-old will follow in Hay’s steps to represent Celtic’s first team or move elsewhere in the summer.