Real Madrid have been working on offloading players after investing heavily in signing new players this summer.

Lucas Vazquez was one of those heading towards the exit door and Arsenal’s interest in the forward has been reported repeatedly.

Last Thursday, we carried a report from AS, who explained the Emirates Stadium ‘could be his destination’.

Not so long after, Marco Asensio suffered a serious knee injury against Arsenal [in a preseason friendly] and is expected to miss most next season.

AS now claims Asensio’s setback has forced Los Blancos to change their transfer plans, especially with the outgoings.

This includes the sale of Vazquez to Unai Emery’s side, which ‘has stopped’. 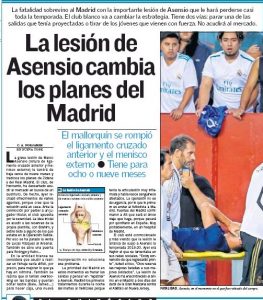 Another report from the same Spanish newspaper claims injury to Asensio will improve Vazquez’s chances of having a good amount of minutes next season and he’s expected to stay at the club.

With Real Madrid changing their stance on Vazquez, Arsenal will have to look at other targets.