For the past few days, the Spanish press have insisted Manchester City’s Ferran Torres has an agreement with Barcelona and has received Pep Guardiola’s approval to leave the Etihad. It’s now down to two clubs to reach an agreement for the transfer.

On Monday, Sport explained the La Liga side have no intention to pay more than €40m for the forward, while the Citizens are asking in excess of €60m.

Mundo Deportivo on Tuesday explain the 21-year-old has ‘many numbers’ to become the new Barca player.

A source close to the negotiation informed Mundo the position of both clubs is ‘getting closer’.

‘There is little difference’ between the starting price set by City and what the Catalan club offer. The details of the fee demanded by the Premier League champions and what Xavi’s side are ready to propose are not mentioned. 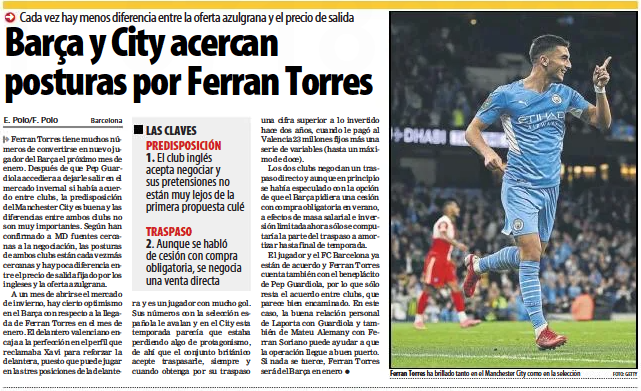 The newspaper says there is ‘some optimism’ for the Spain international to arrive at the Camp Nou. They further add the agreement between City and the Spanish giants ‘seems well under way’.

It’s claimed the two sides are negotiating a ‘direct transfer’, even though it was speculated the option that Barca would request would be a loan deal with the mandatory purchase option, to balance their books.

Barcelona president Joan Laporta shares a good relationship with Guardiola, and Mateu Alemany with Ferran Soriano. This can ‘help the operation come to fruition’ and ‘if nothing goes wrong’, Torres will be a new Barcelona player in January.

Mundo’s report on the Blaugrana’s optimism to secure the former Valencia man’s services, comes a day after Sport stressed why the deal is ‘almost unfeasible’ in January. The latest claims could be sign Barcelona have made progress in convincing City to let Torres leave.