Yesterday we brought you news from Turkey that Besiktas are interested in Aston Villa striker Jonathan Kodjia.

Fotomac have reported on the latest developments regarding the Turkish club’s pursuit of the forward, and they report an agreement has found with the 29 year old on personal terms.

It’s reported Aston Villa are open to letting him leave after the Premier League side brought in the likes of Wesley Moraes and Trezeguet this summer.

However, Fotomac say, given Besiktas’ financial situation, the Black Eagles could still find it difficult to agree terms with Villa, but they’re still hopeful they can bring in the player. 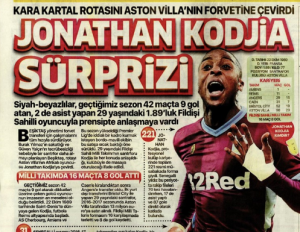 The Ivorian striker was key in Dean Smith’s promotion squad last year and scored 9 goals in 42 games. This season it seems his role in the team will be reduced and he may need to find a club which can give him more opportunities.

Kodjia has one year left on his current contract with Aston Villa.