Home Europe Club to get 15% if Southampton sell defender, and that encourages further...
SHARE

Cedric Soares wasn’t really a name we’ve been seeing a lot in the Portuguese newspapers this year, but suddenly big clubs are being linked the country’s media are enjoying it.

First it was Juventus who reportedly included the right-back on their list to replace Daniel Alves at the club. And now, according to A Bola, Barcelona and Real Madrid have joined the race too.

Actually it’s only the Galacticos who are said to be still alive. The newspaper claims that Barcelona made an approach, but were told they arrived ‘too late’ because Juventus had things advanced already. 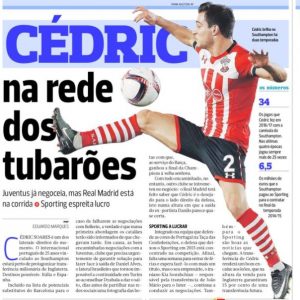 It doesn’t make much sense, because Real Madrid’s contract was made later, and they are still being considered as a possible destination. There are no details on who would be offering more, although it’s clear that the Old Lady is still in the lead.

Sporting are also keeping an eye on the situation. When selling the player to Southampton in 2015, they guaranteed 15% of a future sale, and now hope he can be part of a big deal.

And, in our opinion, it’s that which is driving Portuguese claims, rather than any genuine feeling a Southampton exit is close.