After several weeks of speculation, including the possibility of losing out to Tottenham, Arsenal may have finally secured the signing of William Saliba.

The Saint Etienne defender has been the Gunners priority for the majority of this window and if L’Equipe are to be believed, will be signing at the Emirates sooner rather than later.

The newspaper reports that St Etienne are ‘preparing’ to sell Saliba to Arsenal, although he will spend next season on loan at the French club.

In fact, they say the Ligue 1 side have put ‘the last stamps’, are ‘about to formalise’ things, and that Arsenal have had the last word on the defender. The club complete the deal when they get back from playing Real Madrid in Washington on Tuesday.

Arsenal will pay just under €30m for the 18-year-old, with bonuses and a guaranteed add on of €4m ensuring they have beaten Tottenham to the transfer. 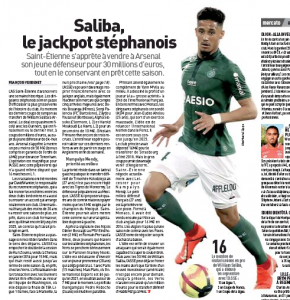 It will go down as the French club’s most expensive sale ever and one that ‘completely suits’ them according to L’Equipe.

In fact, they are already planning on how to spend the money; further suggesting this transfer is a done deal as far as they are concerned.