The Italian press rarely agree on anything, but when they do, it means something’s up.

Take the Romelu Lukaku to Inter rumours in the summer, for example, as they were kicked off rather early (we were sceptical at first) but when a chorus of reports emerged Antonio Conte wanted the Belgian, it was hard not to take notice.

The same is now happening with Nemanja Matić, as the Italian manager looks to bolster his midfield.

We’ve done a number of stories on him in the past, and Gazzetta dello Sport are the latest ones to write about the Serbian.

Omitted once again from the starting lineup at Old Trafford on Sunday, the defensive midfielder is clearly far away from Ole Gunnar Solskjaer’s major plans going forward, meaning a January exit is likely.

Manchester United are reportedly preparing a busy mid-season transfer window, which could see up to four players coming in (according to certain reports), and an exit or two could go hand in hand with those. 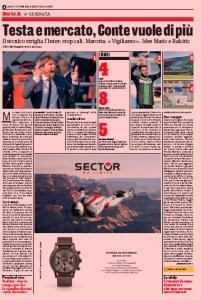 Gazzetta state Inter have ‘already made a few enquiries’, and both Matić and Ivan Rakitić are named as subjects of said moves.

Furthermore, it’s pointed out the Serie A side are ‘following Manchester United’s evolution with interest’, meaning the longer the Serbian is out of Solskjaer’s starting XI, the better it is for them.