Leicester City came from behind to beat Manchester United 4-2 on Saturday and with that, the Foxes ended the Red Devils’ unbeaten away streak in the league.

Youri Tielemans starred for Brendan Rodgers’ side and this has caught the attention of Barcelona.

Xavier Bosch, writing for the last page of Mundo Deportivo, states the La Liga side have been following the midfielder for some time.

Ronald Koeman wanted to bring in Georginio Wijnaldum on a free transfer last summer, but he snubbed the Catalan club and joined Paris Saint-Germain instead.

Tielemans will turn 25-years-of-age in May. Bosch says the Belgium international’s age and qualities make him ‘even more of an interesting profile’ than Wijnaldum. 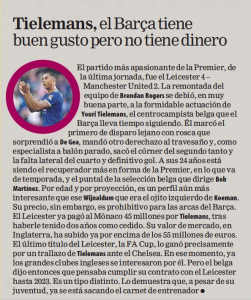 However, his asking price is ‘prohibitive’ for Barca, who are going through a tough economic phase. Leicester invested €45m on the former AS Monaco man and his valuation is now well in excess of €55m.

The Foxes star, meanwhile, is working on getting his coaching badges, despite his young age, this shows he is a ‘different kind of guy’.

With Barca following Tielemans, Bosch says they have ‘good taste, but ‘no money’ to take him away from Leicester.

Everton transfer ‘has not been discussed’ by club yet – Toffees...